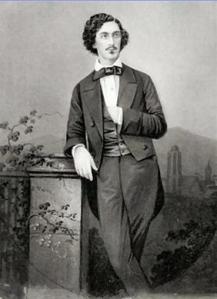 Everybody knows how to sing ‘Ein Kamocha.’ In the UK there’s hardly a Shul that doesn’t sing it more-or-less the same way and yet, there are very few people who know that it was composed by one of the most influential of all composers of Synagogue music – Salomon Sulzer.

Although we don’t sing very many of Sulzer’s pieces any more, there’s no doubt that his highly innovative approach to the music of the Synagogue was significantly instrumental in creating the stylised and formal structure that still exists in most congregations.

Salomon was born in Hohenems, Austria, and, although his family name was Loewy, they changed it and called themselves after the small town called Sulz, where they had settled after having been exiled from their hometown.

He studied, first in Switzerland and travelled as an itinerant cantor in Germany, Switzerland and France. He had some eminent teachers of music including Ignaz von Seyfried, who had himself been a pupil of Haydn and was a friend of Mozart and Beethoven.

In 1826 Sulzer received a call to be cantor at the Viennese Seitenstettengasse Temple, where he remained for forty-five years.

He was the first cantor to apply the rules of classical harmony to traditional synagogue melodies and through the publication of his major work, Shir Zion, his fame spread. The first volume was published in 1840 and the second came out about 1866. Included in this work were also compositions by his teacher von Seyfried, and Franz Schubert.

His efforts did not go unrewarded and in 1874 he became a knight of the Order of Franz Josef and was also made an ‘honourable citizen’ of Vienna.

Since most of Sulzer’s compositions are for Cantor and choir, you are more likely to hear them in a Shul where there is a Chazan and choir. These include Mi Adir at a wedding and one of his arrangements for Adon Olam or Eitz Chayim He. However there are numerous responses and incidentals in our services that owe their origins to Sulzer. The way we begin Ashrei after Kriat Hatorah, Yimloch of the Kedusha and so on, and many similar asides on the Yamim Noraim, can be traced back to his writings.

There are indeed good reasons why Sulzer is often spoken of as the father of modern chazanut.