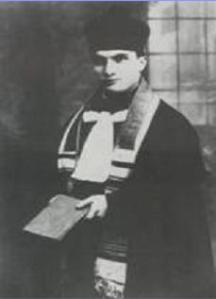 It’s impossible to assess how many great artistes were amongst the casualties of the last war. We do know that Joseph Schmidt, who died at the very young age of 38, was amongst them.

Schmidt was born in Davideny, Buchavina, Rumania to a farming family and as sympathetic as his mother was to Joseph taking up music as a career, so was his father against it.

Because of the First World War he moved with his parents to Czernowitz where, at a very young age, he was appointed Chazan. It was also there, at the age of 20, that Joseph gave his first public performance as a concert singer.

When he was 24, his uncle, Leo Engel, who was a well-known manager, arranged for Joseph to appear in Berlin. He remained there for a while, for his great talent brought him a position as Cantor at the Adas Yisroel Synagogue.

As he established himself, so his concerts gradually took shape. They usually consisted of one half of Chazanut and the second of Neapolitan songs and operatic arias. He was an accomplished pianist and frequently accompanied himself.

It was unfortunate however, that a tenor voice of such brilliance and quality emanated from a frame that was under five feet tall. When the conductor Leo Blech first heard him sing, he was deeply moved: “Pity you aren’t small,” he said; “But I am small,” Schmidt said. “No, you aren’t small, you’re too small,” replied Blech.

Although his stature effectively barred him from opera, there were other outlets for his talents. He appeared in a number of films, he made records and he gave many performances on the radio.  In 1934 he managed to go to Palestine, where he gave a number of Chazanut concerts.

When the war broke out he managed to make his way to France where he settled in the unoccupied zone. When France was defeated he made his way to Switzerland where he arrived virtually penniless. Although he was in possession of an American visa and was very well known, he was interned as an illegal immigrant. Sadly his health deteriorated whilst in the camp, and owing to a lack of proper medical attention he died on November 16th 1942 in Gierenbad Camp, near Hindwhill. He was buried in the Friezenberg Cemetery, near Zurich and it’s reported that all the 350 inmates of the camp attended his funeral, in defiance of authority.

Although his operatic recordings are available, regrettably Schmidt did not make any professional recordings of Chazanut. However,  there are some private ones that were published including B’rich Shmei and Ki Lekach Tov.