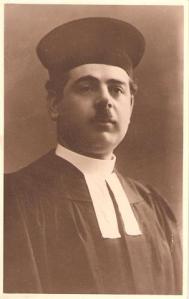 Chazan Gerson Boyars (Boyarsky) was bron in Ostrino near Vilna was one of a large family. His father, Chanoch Aryeh was a tanner, and Gershon received most of his early education in Cheder.He came to Liverpool as a youngster, where he spent a short time, and then went to live with a relative in America. It was in the USA that he started his studies in singing and music and he joined the chorus of the Oliver Ditson Grand Opera Company, with whom he toured. He also sang for a while in the choir of Cantor Yossele Rosenblatt.On one occasion he was heard in New York by Giulio Gatti-Casazza, Caruso’s manager.In the First World War, in 1917 he joined the Jewish Battalion (the Judeans) and fought in the Holy Land and in 1918 he entered Jerusalem. Subsequent to this he became a naturalised Englishman.

Coming to live in England he began his career in the Cantorate in verious small congregations in the East End of London, and the first of his major appointments was to the Western Synagogue.

In 1934 he married Regina Grundstein and c.1928 they removed to the prestigious Singers Hill Synagogue, in Birmingham, in the Midlands. Throughout their married life, Regina, who was an accomplished pianist, used to accompany her husband when he gave public performances.

In 1931 he was apponted to the famous Hampstead Synagogue, where he remained until his retirement some 28 years later.

At Hampstead Chazan Boyars was fortunate to have the illustrious Samuel Alman as his choirmaster, with whom he built a close and fruitful professional association and an excellent rapport. Alman dedicated a number of his compositions to Cantor Boyars and the Hampstead Synagogue became famous for its use of Alman’s beautiful compositions.

In his obituary in the Jewish Chronicle of December 12th 1962 he was said to be:

‘…pessimistic about the future of chazanut. In an address to the Jews’ College Union Society he said that he had come to the conclusion that chazanut, as it was known in this country, was bound to perish. Readers…were not being allowed to practice it as they would like to and it was coming to mean less to congregations than it had meant to Jews from Eastern Europe.’

Chazan Boyars had a special interest in Jewish folk-songs and used to give lectures on the subject and also contributed a number of articles on this subject to the Jewish Chronicle.

Cantor Boyars was a fine pastor to his members and very community spirited, and he retired in 1959.

(I am appreciative to Mr Arthur Boyars, Chazan Boyars’ son, for much of the information in this article.)