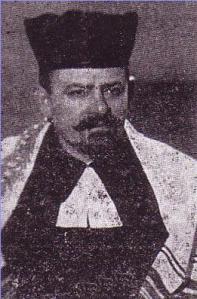 There are only a few among the Jews who came from Vienna, and who love Chazanut, who know the name of Emanuel Frankl today, a man who was one of the leading Chazanim, prominent amongst the Chazanim of Vienna between the two wars.This Chazan was known and admired by the Jews of Vienna. Many crowded together to hear his prayers in the Orthodox ‘Beit Yisrael’ Synagogue, which was known by its other name, ‘The Polnische Schule’, in the second borough, 22 Leopoldgasse.

Emanuel Frankl was born on the 1st January 1889 in Sinic, Rumania, into a family of Rabbis. Until the age of 15 he learned in the local Yeshivah, where his uncle served as the Rosh Yeshivah.  From there he went on to study to become a Rabbi at the famous Pressburg Yeshivah (the Pressburg School of Rabbinics) and was ordained at the age of 22. From his childhood he revealed a talent for singing, melody and prayer, but because it was considered a waste of time, taking him away from learning Torah, he only indulged a little in Chazanut.

While he was studying in the Pressburg Yeshiva, Cantor Yosef Rosenblatt was serving as Chazan in this community, and he heard about the young man with the extraordinary voice who was to become a famous Chazan. Yossele Rosenblatt encouraged Emanuel Frankl and taught him Chazanut, music, and Nusach Hatephillah  – the traditional modes. At the age of 23 was appointed Chazan Rishon in the city of Tiranava in Hungary, (Slovakia today).

After a short time he left this city to become Chief Chazan in the Orthodox ‘Polnai’ synagogue, Beit Yisrael, in Vienna where he replaced the famous Chazan Meir Shor. For 25 years Emanuel Frankl served as Chazan in this synagogue and he became one of the outstanding and most famous of Chazanim of the Cantors of Vienna in his generation.

At that time (from 1914 – November 1938) there were 49 Synagogues in Vienna, who were served by Chazanim who were in the first rank of Cantors, including, Leibush Miller, Gershon Margolis, Mattieus Mattieus, Israel Alter, Joseph Fischer and others.

Under his guidance a choir of men and boys was nurtured, led by the choirmaster Joseph Millet (musician and composer) whose compositions were performed in the Synagogue by Chazan Frankl and the choir. This choir became a place of nuture for future Chazanim and singers such as Benjamin Ungar, Asher Koren and the opera singer David Halpern.

Frankl, as has already been said, was also an ordained Rabbi, therefore he was recruited to serve in the Austrian Kaiser’s army in the first World War as an officer.

Emanuel Frankl refused to make recordings of  his works  on religious grounds, since he was as stringent with minor infractions of the Law as he was with serious ones and he considered the making of recordings a profanation of God’s name. Because of this he failed to be recognised as a famous Chazan and composer by many people. His approach to Chazanut was one that combined the western style (choral), with the eastern, Polish style, giving prominence to the style of the eastern European, and the influence of his teacher, Yossele Rosenblatt was evident in his Davening.

Emanuel Frankl constantly engaged in the subject of Jewish music. In Vienna he brought out a book entitled ‘Shira V’Zimra’ which contained a selection of his compositions and Chazzanic recitatives. He also delivered lectures in the Rabbinical schools in Vienna on the subject, ‘The dissemination of prayer and tasteful melody in Israel.’  He also lectured on these topics in the Jewish Agency in Vienna, and published articles in the Jewish newspapers.

Because of his friendship with Chazan Alter, he also passed his compositions on to him.

His main sphere of activity was in the training of Chazanim, with whom he worked intensively. His home in the ‘Second Borough’, that Borough where most of the Jews of Vienna lived, was in Fugbachgasse and was well known to the young Chazanim, among whom were, Shmuel Boruch Taube, Shlomo Schweid, Asher Koren and others. He also served as the Vice-President of the Chazanim of Vienna and Austria.

His services in the Polish Shul drew in the Jews of Vienna in crowds who came to hear his singing. After they had finished their services in other synagogues and in the Shtibelach, many in the city, even non-Jews, including great opera-singers in Vienna, came to hear him because of his exceptional status in the world of Chazanut in Vienna. This was testified to many times by his famous pupil, the outstandiung Chazan Shmuel Baruch Taube.

With the annexation of Austria under the Nazi police in March 1938 the life of the Jews of Vienna turned upside down due to persecution, detentions and the plottings against them that changed their everyday life.  But the greatest blow came on Crystal Nacht (10th November 1938). On this night all 49 synagogues in Vienna were destroyed and burnt down, with the exception of the Central Synagogue on Zeitnshtetten Street which was ‘only’ greatly damaged, and was in the first borough.   Although there was apprehension that other houses in the borough would also be set on fire.

As a result of Crystal Nacht religious activity ceased in the synagogues, which dealt a death blow to Frankl. Like the other Chazanim who were left without jobs, the economic situation was difficult. Like the rest of his friends he tried to find some way to save his livlihood and to find a position somewhere else.

He was offered a Cantorial position in the United States, but after consideration he preferred to take the offer of a prestigious position in the community of Libau (Lepaya) in Latvia, a congregation which followed the central European traditions wherethere was a beautiful Synagogue and a choir, and he became Chief Cantor in the Choral schul in the city.

The congregation who merited to have such a famous and outstanding Cantor received him with sympathy and joy. Frankl was the most outstanding and famous Chazan in Latvia. In the Jewish periodicals in Latvia in February 1939 they printed enthusiastic words about Frankl and his Davening. In various synagogues in Latvia he was greatly praised since his prayers warmed their hearts, and because of his musicianship, his control of the mysterious arts of Chazanut, and his vocally rich and beautiful baritone voice.

In 1939, Frankl even received a letter of thanks from the president of Latvia (Carolis Ulmanis ?) for a prayer which he composed for the Latvian Independence day.

In June 1941 Nazi troops arrived in Lepaya. On 29th July 1941 Frankl was taken out to be murdered in the city together with the city councillors. They were shot in the street. His wife and family were sent to the death camp where they met their end. His son was
saved and went to live in Australia.

And so, at the age of 52 the world of Chazanut lost one of its greatest Chazanim –  Chazan, Rabbi, Scholar –  one  who is totally forgotten today, because those who appreciated him,  the many thousands of Jews of Vienna and central Europe, as well as his colleagues with whom he kept in touch – they no longer exist.

In the absence of original recordings the prominent position that he held in the world of Chazanut andJewish liturgical music is forgotten, as is the admiration that he received amongst many of the Jews of Vienna of his time.

My sincere thanks to Mr Jacob M Koren who wrote this article.
He writes:
“It is dedicated to the memory of the Cantors of Vienna who served in more than 50 synagogues. It is based on memories of my beloved father Usher (Asher) Korn, (who was a cantor), and a student of Cantor’s Miller and Frankl, and Jewish newspapers from Vienna and Latvia in these times.”