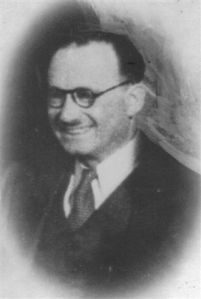 My father, Solomon Koor was born in Russia in Kurnitz, Vilna in 1888.  He studied Torah, but when he reached the age to be drafted into the Russian Army he escaped and came to London.  He cme to the East End where the docks were.  He became a Master Tailor but still studied Torah being active in the local Shul, leyining every Shabbat.

He met my Mother also a tailoress in the workshop of her brother where he also worked.  They married in 1913.  He was 25 years old.  My father applied and was granted “English Naturalization” in 1920.  He was 32 years old.  Previously he served in the British Army during the 1914-18 war.  He was drafted to Palestine to do his army service.  There is a Museum in Netanya where the names of British Servicemen who served in Palestine are listed and my father’s name is there.

They moved to Notting Hill where the Rabbi of the Shul, Rabbi Isadore Newman, was suddenly taken ill.  My father stepped in and eventually became the Reverend/Minister and Chazan of the Notting Hill Federation Shul.  He was a well know figure in the area.  He was an extremely knowledgeable, respected and loved man by all in the Shul.  He acted as Chazan.  He had a beautiful voice performing marriages, funerals and generally performing all the duties encumbent upon a Minister of Religion and Chazan, so much so that members of New West End and Bayswater Synagogues would come to hear him leading the Services.  He was a founder member of the Notting Hill Zionist Society and a lifelong staunch worker and supporter of our National Ideals.  He believed and fought for the redemption of Israel.

He died suddenly after speaking at a Public Dinner on Lag B’Omer in 1946.  He was only 58 years old.  On the day of his funeral the market traders and shop keepers in the Portobella Road market closed as a sign of respect.  Such was the high esteem and respect in which he was held.

(Thanks to his daughter Lily Broza for this article)