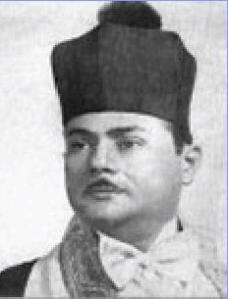 There’s a famous Hebrew saying, Al Ta’am Varei’ach Ein Lehivakei’ach – You can’t argue over taste or smell. This is a very fortunate epithet in regards to taste in Chazanut and Chazanim. Everyone’s an expert and every Shul-going Jew knows what a good Chazan is.

Whilst not everyone will agree that Moshe Kussevitsky was the finest Chazan who ever lived (see above!), it’s inconceivable that anyone would say that he wasn’t at least, one of the finest.

Moshe Kussevitsky is regarded generally as the Chazan’s Chazan. He was possessed of an outstanding, well-trained, tenor voice of extraordinay range and flexibility and an innate understanding of the art of Chazanut.

Moshe was born on June 9th 1899 at Smargon in Vilna, Lithuania and came from a background of Chazanut. Moshe was the oldest of the four brothers, with Jacob, Simcha and David and, as is well-known, they all went on to become famous Chazanim in their own right.

Moshe began his career at the age of eight as an alto in the choir of Chazan Shlepak and as he grew up he toyed with the idea of becoming an artist or a sculptor. Fortunately, however, he accepted a position as Chazan at the Vilna ‘Savel’s Shul’ and in 1927 he auditioned for the plum position in Poland at the ‘Tlomazke Shul’ in Warsaw where, against the finest opposition, he was awarded the post. He took the opportunity to study voice and music and throughout his life he always learned Torah.

Being in such an illustrious job, his fame spread around Europe very rapidly and soon he was travelling to Brussels, Antwerp, Vienna and London to give concerts.

During the second world war Moshe took his family to Russia and adopted the name Mikhail Kussevitsky. While he was there he sang in the operas Boris Goudenov, Tosca and Rigoletto.

When he returned to Poland he gave a concert at which the ambassadors of the United Kingdom and the United States were in the audience. As a result of this concert he obtained visas for both countries and came to England until 1947, when he went to settle in America.

Moshe continued to travel and concertise all over the world and there will probably be people reading this who will recall his appearance at the Royal Albert Hall, London, on 13th March 1955. Fortunately he also made numerous recordings and, even though they were produced on comparatively primitive equipment, it is still possible to appreciate the exceptional quality of his voice and his singing on those that have been re-recorded today.

The last post he held was at the famous Temple Beth El in Boro Park, Brooklyn.

Moshe died on August 23rd 1966 and is buried in Jersualem.