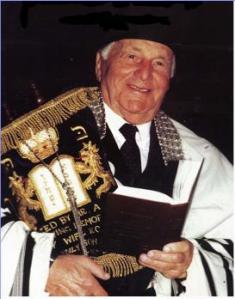 Kalman Fausner was born in Tyrawa Poland on July 11th 1909.  He died in Hove on September 2nd 2007 aged 98.   For seventy-four years he was Chazan, then Emeritus Chazan of the Hove Hebrew Congregation.  He was blessed with a very melodious voice as well as a shining personality and this was the secret of his immense popularity within the Brighton and Hove Community of which he was a legend in his own lifetime.He was raised as a Chasid, which certainly gave him the tools to be a true Baal Tefillah, understanding the words he spoke at the Bima and interpreting them in impeccable nusach.   He had a natural talent, flowing musical ability and feeling and sensitivity to the beautiful chants of the Synagogue.  In his late teens he learned in the Lublin Yeshiva under Rabbi Meir Shapira, famous for his innovation of Daf Yomi, a daily page of Talmud to be studied throughout Jewry.

Deciding to become a Chazan he went to Brussels and then Tel Aviv where he studied with the great Cantor Zavel Kwartin.   Taking his turn to officiate at the Great Synagogue Allenby Street, he was heard by L. W. Frankel, then President of Holland Road Synagogue, Hove.   He was so impressed that he decided to bring back Kalman to his shul.

Formalities stepped in, and it would take time for the British Home Office to give him permission to come to England as a regular citizen so Kalman went back to Poland.   Eventually Kalman with his wife and baby David arrived in time for the High Holy Days in 1933, three years after his “audition” at the Great Synagogue, Tel Aviv!

The local community was growing swiftly during this period and the attraction of  listening to Kalman each week certainly helped.   In addition, kosher boarding houses, restaurants and hotels were springing up all around, so there were always many visitors to the ever popular and crowded Holland Road.   Chazan Fausner was an extremely conscientious pastor, always encouraging new arrivals making sure they were comfortable and encouraging them into the shul.   Chazan Fausner’s colleague for many years was the shul’s first Rav, Rabbi Bernard Wilner.   He joined the congregation a year after the Chazan in 1934.  Rabbi Wilner founded the Talmud Torah in which both taught.  They served together for 34 years.

Kalman was an enthusiastic teacher, training endless barmitzvah boys and conducting countless wedding ceremonies.  He was friendly with many of the great chazanim of the day, including Gershon Sirota, Rossele Rosenblatt, the Kusevitsky brothers and Yaacov Goldstein.   He loved to give them a “busman’s’ holiday on their visits to Hove by inviting them on to his Bima.  Many a time when I visited him he would proudly show me his picture postcard taken meeting Sirota at the Brighton Station, or the white chazan’s cappel that was left by Yosselle after officiating one Pesach and reciting the Tal.  He continued to help the congregation well past his retirement in 1987.  He would often call up and make Kiddush in his nineties, as well as solemnly chant the Kol Nidre Prayer each year.  He attended the shul until he could no longer walk, which was a few months before his passing.

Kalman was blessed with a loving and supportive family who gave him much pleasure and happiness.   He married Frieda Klein in Antwerp in 1932, their two sons are David and Raymond.   Frieda passed away in 1956 and in 1958 Kalman married Anne Simons of Hove, their daughter is Laura.   He is sadly missed and fondly remembered as one of Anglo-Jewry’s longest servings and best loved ministers.  In 1995 he was in receipt of the Chief Rabbinate’s Award for Excellence.

My sincere thanks to Rabbi David Katanka who contributed this article.