How Ben-Zion Kapov-Kagan got his name, is a story all in its own right!

The Kagan family, as can be told from their name, were Cohanim. The prefixed Kapov also arose from their priestly status, since the word Kapov in Hebrew means ‘his hands’ and is reminiscent of the fact that, when the Cohanim are standing in front of the Ark, blessing the people, they must raise their hands aloft.

As for ‘Ben-Zion’, he was really ‘Yisrael Noach.’ But we’ll come to that in a moment!

Yisrael Noach Kapov-Kagan was born in Romania.  His father, Shlomo, was a merchant who died at a young age leaving behind eleven children, eight of whom also died within a short time of one another whilst they were still children.

As a youngster, Yisrael Noach sang in various synagogue choirs and at the age of 26 he obtained his first position in Rostov Am Don.  He was then engaged by the Brodie Schul in Odessa, where he contested against 42 Chazanim for the post.

(As an aside, I shouldn’t think that there’s a Chazan alive today who had to put himself up against so many other contenders for a position.  I wonder, is this a reflection on the lack of pulpits, or the lack of Chazanim?  Perhaps it’s simply an indication of the sadly diminishing interest in Chazanut.) 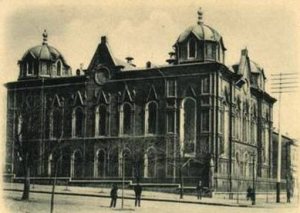 In those days the top Chazanim were treated as ‘stars’ and some of them were paid extraordinarily well. Kapov-Kagan was amongst this number and he became very wealthy.

In 1930, the Bolsheviks came to his house to demand money.  When he refused, they broke his arm and cut off his thumb!

Eventually, using his brother Ben-Zion’s passport, he was able to flee Russia, leaving his wife and child behind. He was now known as ‘Ben-Zion,’ and he retained his brother’s name for the rest of his life.

When he went to the United States, he became Chazan, first to the Jewish Centre in Ocean Parkway and then to the Concords Jewish centre in the Bronx.

Kapov-Kagan gave concerts all around the States.  He also went to Canada and South America, and frequently performed with the choir of the famous choir-leader, Oscar Julius.

Until the end of his life, he tried to get permission for his wife and son to join him in America.  He enlisted the assistance of President Roosevelt, but even he was unable to help.