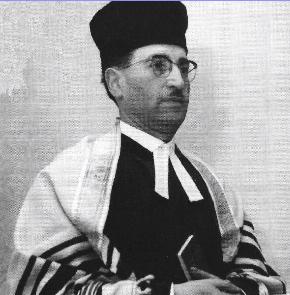 Charles Lowy was born in Bratislava (Pressburg) in 1911, the second of eight children. His father came from Hungary, his mother’s people from Nijmegen in Holland. He studied in the yeshivot of Galanta and Tselem, finishing up at the renowned Chatam Sofer Yeshiva in Pressburg.

After attending evening classes in business and working as correspondent and assistant bookkeeper for the Sphinx Metal Factory, in 1937 he went to Munich to take up an appointment as cantor of the Linat Hatsedek Reichenbach Synagogue. While in Munich, he also studied music and voice production at the Trapp Conservatory.

Escaping from Munich after Kristallnacht, he went to Hungary and eventually became chief cantor in Szolnok, 100 kilometers from the capital. He also served a short period as cantor of Budapest’s Rombach Synagogue, and as assistant chief cantor at the magnificent Dohany St. Synagogue.

The years 1942-45 were taken up with long and hazardous periods of forced labour for the Germany army. It was during one of these that his wife, Kati, and newborn son were deported and killed at Auschwitz He was liberated by the Russians in 1945.

In 1947 he was appointed cantor of the Queen’s Park Synagogue in Glasgow, Scotland, and left continental Europe with his second wife, Magda, turning his back for good on the scene of his and the Jewish people’s greatest tribulation.

After 11 years in Glasgow, he left Scotland and served for 28 years as cantor of the Hampstead Synagogue in London’s Dennington Park Road.