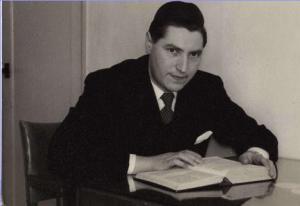 Morris Katanka, was an English-born Chazan who graced the pulpits of this country for many years.He came from a musical family in Mile End, London, the youngest of five children, and regularly attended the Mile End and Bow Synagogue, Harley Grove, where he sang as a soloist in the choir of Chazan Yehudah Rosenfeld.

During the war, Morris Katanka served in the Royal Air Force in Europe and the Middle East, and assisted in organising services for the Forces.

In 1947 he went to study in the Chazanut department at Jews’ College, first with the Rev Shlomo Pinkasovitch and then later with the Rev Leo Bryll.  These were the days when practically every Synagogue had its own Chazan  so, when the incumbent Chazan was on holiday Jews’ College would be called upon to supply a student to fill in.  This meant that students got lots of experience officiating at many different synagogues, so the young Katanka’s big, baritonal voice was frequently heard around London.

For a short while he served as a temporary Chazan at Dukes Place Synagogue and in 1950 he was appointed to the first of the only two positions that he held throughout his career, at Shepherds Bush.

In 1955 Chazan Katanka received a call to be the First Reader of the prestigious Princes Road Synagogue, Liverpool, where he remained for the rest of his life.  This was a community which was well-known for its fine musical tradition of Chazan and Choir, and Chazan Katanka enhanced the status that it had gained, not only within the Synagogue, but also by the loving pastoral care that he gave to his congregants.

Princes Road also has always had the reputation of being one of the most beautiful Synagogue buildings in this country, so it was indeed a tragedy when, just as the Chazan was about to celebrate 25 years of service to the congregation, it was badly damaged by fire. One can only imagine the difficulties, both physical and emotional, of having to officiate for many months in the Shul while it was being rebuilt.

It was re-consecrated on the eighth night of Chanukah, December 1980, and this was to be Chazan Katanka’s final major service, for, after having officiated at the Kabbalat Shabbat service of Parashat Yitro in January of the following year, he passed away during the night, having served the congregation with great devotion for 27 years.

During its long history, until Chazan Katanka’s demise the Princes Road Synagogue was served by five Chazanim; Jacob Prag, Harris Burman, Abraham Coleman, Herman Bornstein and Morris Katanka.  It’s  noteworthy  that four out of these five, including Morris Katanka, served the community for exactly 27 years!

Unfortunately Chazan Katanka didn’t make any professional recordings, but there are, undoubtedly, many private ones in existence, as well as Uvenucho Yomar and Eli Eli that the family have.

(Thanks to Chazan Katanka’s son, Rabbi David Katanka for some of the information supplied in this article.)