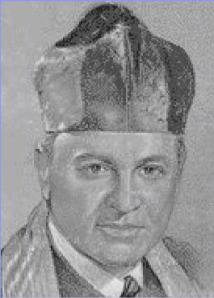 “The Cantors’ Cantor”Gleaned from many sources

Until the very end of his long career, Moshe Ganchoff represented our last connection to the style that earned hazzanut of the early 20th century the sobriquet: Golden Age. He was born in Odessa and emigrated as a young child with his parents to the United States. He received his early hazzanic training in Toledo, Ohio, to which several Odessa-trained cantors had gravitated: Simon Zemachson, Mendel Shapiro and Aryeh Leib Rutman, among them.In his teens he moved to New York for the purpose of studying with Joshua Lind, Jacob Rapaport, and Mordechai Hershman. In 1944 he succeeded David Roitman as cantor at Manhattan’s Shaare Zedek on West 93rd Street. In 1957 he was engaged by Grossinger’s Hotel in the Catskill Mountains resort area of upstate New York for all major holidays. This allowed him to guest-officiate and concertize widely, as well as to teach and compose. Over a period of 25 years he was featured in a weekly radio program on the Jewish Daily Forward’s station, WEVD, and for each show he wrote a new composition. The following appeared in his obituary:

If it seems strange that a cantor, even a lyric tenor

known for his breathtaking improvisations, would be a
headline attraction at a Catskills resort, it is at least
partly because there has been a striking decline in the
everyday appreciation of the timeless subtleties of
Jewish liturgical music. There was a time when
ordinary worshipers at a synagogue were so
passionately familiar with the underlying music and so
attuned to the styles, talents and limitations of the
various cantors that they would discuss them
endlessly, like opera buffs weighing the appeal of a
Caruso or a Pavarotti.1Perhaps Ganchoff’s most enduring contribution to hazzanut in the 20th century and beyond was his teaching of succeeding generations for almost three decades at the Hebrew Union College’s School of Sacred Music in Manhattan. One of the student he influenced is Jack Mendelson, a past president of the Cantors Assembly. Mendelson has, in turn, carried the torch of Ganchoff’s intellectual and musically intricate approach to hazzanim in both the Conservative and Reform movements through courses taught at his own alma mater and at the Jewish Theological Seminary’s H.L. Miller Cantorial School. Ganchoff’s durable tenor voice, silver-toned and broad-ranging, served as an accessible model to Mendelson and numerous other disciples, well beyond an age when most singers no longer even attempt to sustain a single phrase worthy of emulation. His singing, available on recordings of single prayers and entire sections of selected services, affords us a summary of what 20th century hazzanut was all about. Most striking is the way he was able to break through the stultifying inevitability of verses that were recited every day of his listeners’ livesin some cases twice or three times daily. Somehow, he made those verses leap off the page and come startlingly alive in the awareness of those whom he led in prayer. That level of t’fillah exemplified the dictum of Rabbi Isaac Avraham Kook, first Chief rabbi of British-Mandated Palestine: Ha-yashan yit-hadeish v’he-hadash yit-kaddeish  (The old will be made new and the new will be made holy).

Moshe Ganchoff achieved this renovation/sacralization through the element of discovery. He revealed hidden meanings in the familiar words, spinning musical Midrash through unexpected shifts of mode and nuanced musical allusions to other times and events that our people has experienced over the course of its history. His hazzanut recalled that of every outstanding cantor of the past century. It rivaled, among others, the melodic inventiveness of Yossele Rosenblatt (1882-1933), the lyric vocalization of Mordechai Hershman (1888-1941), the facile coloratura of Berele Chagy (1892-1954), and the harmonic daring of David Kusevitsky (1911-1985). When the text called for it, he would resort to dramatic breaks in the recitation-line à la Leib Glantz (1898-1964) or Pierre Pinchik (1900-1971), and his utilization of the mezza di voce reminded one of David Roitman (1884-1943). His improvisatory forays could roam as far afield as those of Aryeh Leib Rutman (1866-1935) or Alter Yehiel Karniol (1855-1928), constituting
mini-recitatives unto themselves.

Moshe Ganchoff brought his mastery of all these techniques to the compositions of his final years, the 20th century’s final decade as well. His Hoshana even sh’tiyah (“O save the Foundation Stone—site of Your Holy Temple”), recited on the Second Day of Sukkot, includes a section that Ganchoff called a d’veikah (“closeness to the Divinity”). It is a precious moment of going one-on-one with God, to the exclusion of all profane thoughts or virtuostic showiness. It occurs right after he pleads for return of the Sh’khinah (God’s Presence) to Zion, the spot marked as linat ha-tsedek, the lodging-place of righteousness in this world.

With grateful thanks to