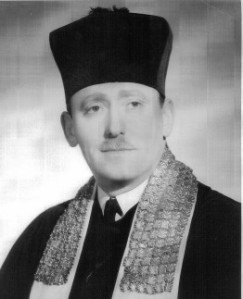 Chazzan Ephraim Fishel Rosenberg was born June 25th 1917 in Betlan, Transylvannia. As a youngster he studied at the Yeshiva of the Vizhnizter Chassidim. He studied Chazzonus with the famous Chazzan Pinchos Spektor (1872-1951).Chazzan Rosenberg got married in the early 1930’s and accepted a position at the Great Synagogue of Bucharest, Romania. During WWII Chazzan Rosenberg was able to remain his position and, together with his wife Esther, sheltered many Jewish refugees who were fleeing from the Nazis. After the Shoah he took a position in Antwerp (could be Brussels) for a short while, before accepting a position in London in 1947 at the Shomrei Hadass Synagogue, Finchley Road.

In 1949 he was invited to serve at the Great Synagogue on Allenby Street in Tel Aviv. While serving in Tel Aviv Chazzan Rosenberg was also named Chazzan Rishon of Israel and the Israeli Defence Force.

In 1952 he returned to London to serve at the New Synagogue of Stamford Hill, Egerton Road. In 1956 Chazzan Rosenberg auditioned for the post at the Concourse Centre of Israel in the Bronx by chanting a Sabbath service there. At the time Chazzan Shmuel Vigoda officiated there. (Chazzan Vigoda replaced Chazzan Benzion Kapov-Kagan, who had collapsed from lung cancer during the service, but since Chazzan Kapov-Kagan did not return, the synagogue was looking for another Chazzan.) It was the choir conductor of the synagogue, Mr. Oscar Julius, who decided that Chazzan Rosenberg was the right man to take over the position from Chazzan Vigoda. Chazzan Rosenberg would serve at the Concourse Centre of Israel from 1956 until 1967.

While serving in New York, he was also a teacher at the Jewish Theological Seminary and president of “Der Khazonim Farband” (the Jewish Ministers Cantors’ Association of America and Canada).

On December 5th 1960 Chazzan Rosenberg was chosen out of over 250 Chazzonim to be one of the main soloists at a concert, to celebrate the 60th anniversary of the JMCA, in Madison Square Garden. Before a capacity crowd of over 20.000 people he sang “Sim Sholom.”

In 1967 he accepted a position at Beth Shalom Congregation in Toronto, where he would serve until his death in 1978.

In the night of February 15th he complained of pains in the chest. Chazzan Rosenberg was immediately brought to the Landiano Hospital in Netanya, where he died of a massive coronary attack the next morning, age 60.

Chazzan Rosenberg was a a frum, modest man, who felt as though he wasn’t worthy of being the “Sheliach Tzibur” and never made any professional recordings. He made a great impression on all the congregants of the synagogues which pulpits he graced. He truly stands out as one of the great Chazzonim from his generation.

(Sincere thanks to Jeffrey Lieuwen for this biography)