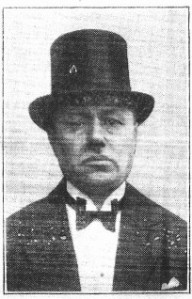 Chazan Isaac Icht was born in Kishnoff, Bessarabia and was the son of wealthy parents who did not desire him to become a Chazan.  The dreadful Kishineff pogroms of 1905 however, changed matters and Mr Icht came into contact with a well-known professor of music at Czernowitz who strongly advised him to take a musical career.Two years later he made a great impression as Cantor in Odessa.  Whilst there he teamed up with the great Chazan David Roitman, and they would go visiting towns and villages together, one Davening Mincha and the other Ma’ariv, in order to raise money for charity.

After his marriage in 1909, Chazan Icht was invited to the post of Cantor at the Berdichev Choir Shool.  Later he was Cantor in Elizabethgrad, now Zinovieski, until the pogroms of 1919. Besides his synagogal duties he took an interest in educational work and was the head of the Tarbut movement in his district, as well as headmaster of a group of schools.

In the Bolshevik upheaval he again went to Odessa and dreamed of going to Israel, however he landed in Manchester in 1924 and was appointed Chazan of the North Manchester Broder Synagogue, a post he held for eight years.

During his time in Manchester he founded the Manchester Association of Chazanim, in which he served as president.  Among the Chazanim in this group of Manchester Chazanim were Cantor Harris Newman, Cantor Isidore Siroto, Cantor Victor Schlesinger, Cantor Solomon Stern, Cantor A. Elfand, Cantor Solomon Hershman, Cantor L.  Glickman, Cantor Krushevski and Cantor W. Garbarz, all of them great exponents of Chazonus.

He was the Manchester correspondent of the Jewish Times, and also musical director of the Hazomir Choral Society.  He also founded the first Tarbut Society in Manchester.

Due to a tragic illness, Rev Icht was cut off in the prime of life at the young age of 46.  Rabbi Dr H.  Freedman wrote in the Jewish Chronicle of 21st September 1934:

The early death of the Rev Icht z”l has deprived the North Manchester Synagogue of a Reader of rare ability and talent, the Jewish community of a man of charm and distinction, and the Zionist movement of an enthusiastic adherent of its cause.  As a Chazan he reading of the service was far more than the utterance of words in a rich baritone voice, or their phrasing in harmonious melody.  He possessed a full understanding of the meaning of our liturgy and realised that in it lay enshrined the sorrows of the Jewish people, their triumphs and spiritual exultations, and in his rendering of the prayers he frequently poured out his very soul, interpreting the depth of their feeling in passionate song that was vivid and moving.  A man of culture and education, he was welcome in all circle on account of his affability of demeanour and social charm.  With these gifts he succeeded in making a large body of friends who appreciated him for his insight and kindness of heart.  He was a journalist too of no mean ability as was testified by his frequent contributions to the Anglo-Yiddish press.  He was an ardent supporter of Zionism in both its practical and cultural aspects.