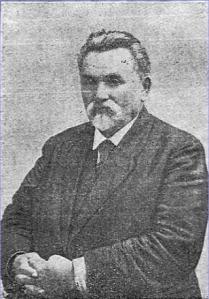 David Nowakowsky was born in Russia in the town of Malin, Province of Kiev, in 1849. At the age of eight, due to an unbearable stepmother, he had to leave home. Going to the town of Berdichev, he joined the choir of the Chorale-Synagogue of that city, where he remained for ten years. During that time he acquired, mostly self-taught, the knowledge of harmony and counterpoint. At 21 he went to Odessa, where he became choir-master of the Broder Shul, the Liberal Synagogue of that city, a post which he held for half a century, succeeding Nissan Blumenthal (1805-1902). For 30 years, Nowakowsky was musical director of the Orphan Asylum of that city. He also taught harmony and counterpoint privately and at various music schools.The Broder Shul celebrated his 40th anniversary of service to it on November 20, 1910, and ten years later his 50th. He died on July 25, 1921.

Upon his arrival at the Broder Shul, Nowakowsky found Nissan Blumenthal at the height of his fame and influence. Blumenthal, a man of intellect, culture and personality, believed that musical reform in the synagogue could be achieved by setting prayers to the music of classic oratorios and operas; for example, he adopted the Hebrew text of Psalm 113 to Handel’s “Hallelujah” from the “Messiah”. While this was no doubt good music, Nowakowsky felt, with a great many others, that its place was not in the synagogue, and he replaced such intrusions with works of his own. But Blumenthal’s influence was too strong to risk the diminution of his own position, power and prestige in his congregation and community. He resisted his young choirmaster’s pressure to change his ideas. Neither did he want him to introduce his own works, for young Nowakowsky’s compositions were of an entirely different character from his.

In 1891, after 50 years of service, Blumenthal retired and was succeeded by Pinchas Minkowsky (1859-1924) who had already gained some reputation as a Cantor. He had a beautiful lyric tenor voice and sound knowledge of harmony and counterpoint. It was a great joy and satisfaction for Minkowsky, on his arrival at the Broder Shul in Odessa, to find David Nowakowsky as his musical director and co-worker. During the Blumenthal period, Nowakowsky had been subdued and was obliged at times to act as assistant cantor. With Minkowsky, the relationship developed into one of equality, friendship and respect.

Minkowsky began to bring out the already composed works of Nowakowsky. His beautiful voice and musical intelligence enabled him to interpret the cantor solos superbly. This gave strength to Nowakowsky’s ideals and inspired him to compose new works and to rise to new artistic levels. It was during the Minkowsky-Nowakowsky period that the Sabbath services in the Broder Shul acquired fame throughout Europe. Visitors to Odessa or its environs never failed to visit the Shul to hear Minkowsky’s chazzanuth and Nowakowsky’s choir and compositions. He was a choir director of distinction, commanding and demanding. Russian dignitaries, and some of the military stationed in Odessa, are said to have gone often to the synagogue, “where good singing was to be heard.”

These two musicians inspired each other and worked with absolute sincerity in their art, to raise the dignity of the service and to purify synagogue music. Minkowsky’s scientific knowledge influenced the young composer to seek new musical forms. The result manifested itself in his technique of thematic development, thematic transformation, fugues, contrapuntal choral writing for 5, 6, 7 and 8 voices, double choruses, art songs, and finally in an Oratorio based on “Ha-azinu” – the Farewell song of Moses. Minkowsky, or the other hand, was encouraged by his colleague to compose, and frequently received help from him in the solution of difficult musical problems.

Nowakowsky, in his modest way, felt it his duty to make use of the traditional modes and melodies whenever and wherever possible. This was in line with the growing movement among European composers of synagogue music of that time to make synagogue music more synagogal. He may really be considered one of the first to make use of the “Nussah” as thematic material for a fugue, as in his “V’Shomru” in C Minor (Shire David). The accepted manner of singing “L’cho Dodi” to some “hurdy-gurdy” sounding tune, moved Nowakowsky to employ a melody traditional among East European Jews instead.

That he is not entirely free from foreign influences such as the operatic style and the general Russian harmonic style and form of the late 19th century, is evidenced very often in his recitatives for the cantor. This is particularly clear in the closing section of his F major “Tov L’hodos (Shire David).

Nowakowsky always strove for refinement in his music, and for proper expression of the text through the medium of the tone. Insofar as actual form in composition is concerned, Nowakowsky stands far above his predecessors, among whom one rarely finds the development or transformation of thematic material. or the most part, their works are episodic in form. Traces of a unifying thread or thematic development are rare. Nowakowsky’s F major “Adon Olom” an exemplary piece of synagogue music, affords proof of us success in bringing form into synagogue composition. His 115th Psalm “Adonoy Zechrono” is also interestng, from the point of view of thematic development and contains a very interesting fugato at its close.

Nowakowsky’s contrapuntal technique increased as he went on. His “Ono Tovo” (Mss.), compsed for a Yom Kippur Koton Service, and also appropriate for the penitential prayers on the Day of Atonement, is scored for 2 choirs of 4 voices each, and shows Nowakowsky at his loftiest. The organ accompaniment, a feature of his work, indicates that it belongs to the later Nowakowsky period, when the organ was introduced in the Broder Shul. A second important composition is his Oratorio “Ha-azinu” (Mss.), composed in his 62nd year. It is scored for 4 part choir, tenor solo and organ accompaniment. The title page intimates that the work was composed at the suggestion of the great Bialik, then an inhabitant of Odessa, and a worshipper at the Broder Shul.

Nowakowsky’s music was not easy to perform and required expert direction and understanding. This gave the cantors and choirmasters a goal to be worked for and achieved, spurring the advancement of the cause of synagogue music.

While Nowakowsky sometimes fell short in achieving complete Jewish individuality in his harmonies, he showed the way to his own and later times, melodically, rhythmically and structurally. The life of this master of synagogue music was characterized by deep religiosity, refinement, and high idealism. His works reveal the hand of the craftsman.

(This is the Preface to Nowakowsky’s Shirei David, by
A. W. Binder, Professor of Liturgical Music, Hebrew Union College,
Jewish Institute of Religion Instructor, School of Sacred Music)